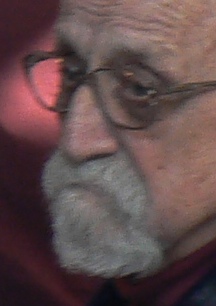 on numerous occasions in church, sitting in our pew, listening to the music, and god-breathed readings from the Bible. As a person and as a father of children he was touched in this manner. His eyes filled with tears. Me too, dad, me too.
The night my father was on the David Letterman show with his sound sculptures, his grownup son was lying on Betty's living room carpet in Gardena, California. The Friday night fellowship had met to sing and pray, folks were out in her kitchen, and a cycle of release was at work on me. The knot I felt in my gut earlier that day during chapel, was moving up into my chest. What followed was deep cries and sobbing. Eyes shut, open and willing, not knowing where it would go, just being, and letting him work. And then...taken down into a slumber, a deep peace, unbroken, a stillness, while laying on that living room floor. And then...a trembling began again in my stomach. I could feel it moving up into my chest, and then wailing burst out of my mouth, tears streaming. The slumber returned, taking me down into His coma, His embrace. (On The Floor by Karl Marxhausen, painting, below) 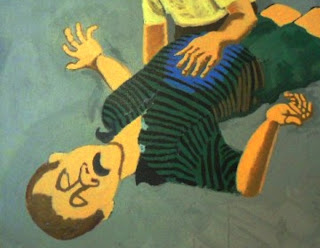 The pattern of tremors in my stomach, the wrenching sobs, and the descent into peace repeated and repeated and went on for three hours. When it was all over I was tired. One of the company told me my father had been on TV. It was 11 o'clock Pacific Standard Time. This had come by one moving within, unlocking, releasing tears, His kindness in my physical being.
You could say that "logic sat at the door waiting 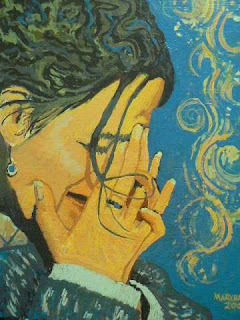 for it to end." And that's the point here. I do not figure it out. I go through it. I am open. Tears are the reaction in us when He does it. Sitting in the pew, seeing God doing it in my father's eyes, it is private, it is intimate, our bodies unravel, our minds allow his touch to infiltrate and tear down barriers from within.(Lost In Wonder by Karl Marxhausen, painting, above)
During this funeral there was chamber music, the words of Jesus remembered, litanies recited, declarations of faith, an open upright pine casket, stories of my father, and an attitude of celebration. More than words can say, it is about our history with Jesus. It is His action that pulls me into his reality, his pardon for my offense, his breath - a living direction, His voice within, His choice-enacting, intimacy, engulfing my senses. He comes and my tear ducts respond in the midst of his nearness, his fragrance, his touch. 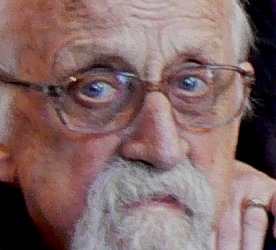 Posted by Karl Marxhausen at 3:00 PM No comments: 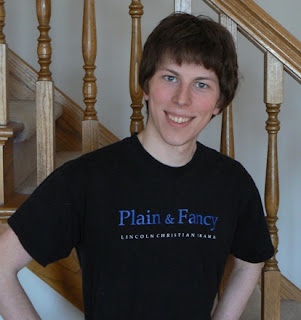 Josh Duncan is a junior at Concordia University in Seward, Nebraska.
His blog is called  "Reinhold Marxhausen -- A place where his work can live."   http://www.marxhausen.blogspot.com I caught up with Mr. Duncan at his home in Hickman, Nebraska and conducted this short interview. For the interview in its entirety, click on the 3 minute video below.


Josh: "Well, Reinhold just does art that is fascinating, I like that he is fascinated with light, and I like how he makes connections between his art and his Christian faith. And the idea of accidents, being something that God blesses as well. All that, especially the connection with his faith appeals to me, I think that it is really important for Christian artists to understand that about him."
Karl: "How did you first hear about him?"
Josh: "It was through Professor Anshutz's class. I had heard his name, because it was the Marxhausen Gallery. But all I knew about the Marxhausen Gallery was that it was named after some guy called "Marxhausen." Then, as I saw  his artwork, and especially read and talk about his artwork, then I realized, you know, why he got that gallery named after him... Everybody I talked to, science teachers, guys who went into banking, they all remember Marxhausen, and they all talked about how he changed the way they looked at the world. Everybody, not just art students, were influenced or inspired by him."
Karl: "Who is Anshutz?"
Josh: "Anshutz is the professor of Concordia. He teaches the CLA classes.
The CLA does work for churches across the country."
Karl: "What is the CLA?"
Josh: "The Center for Liturgical Art. (Professor) Anshutz was a student of Marxhausen's. He called him "one of his art dads." He has been encouraging his students to learn more about Marxhausen. The things he taught his art students twenty years ago are true today."
Karl: "What are some of the other names of students who have worked on this project?"
Josh: "Amber Kones is a big one. She founded it originally. Abbey Lange is a graduate who has been working with Anshutz this year. She has put an exhibition together of Marxhausen's work."
Karl: "What year are you at Concordia University?"
Josh: " I am a Junior this year. One more year of studying for me...
I believe that artists ought try to educate others. A lot of artists I think are more interested in just their art career or selling their work. Marxhausen is a guy who helps other people see what he is seeing. He had a lot of events called "Do You See What I See?" I think artists need to be good advocates of why art is important. And Marxhausen was that."
Karl: "Thank you very much."


You can read his posts here. For more about the CLA, click here. 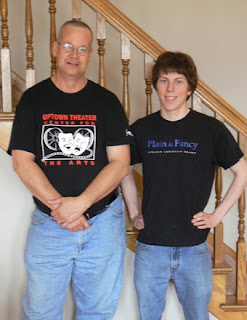 The men in black, Karl and Josh.
Posted by Karl Marxhausen at 4:02 PM No comments: 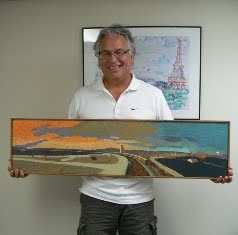 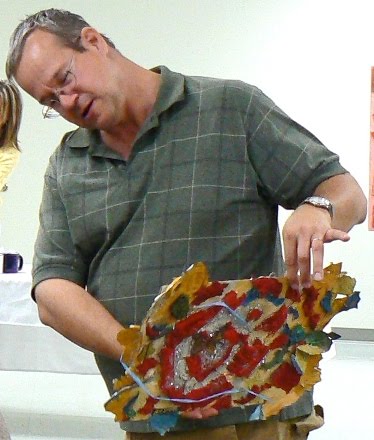 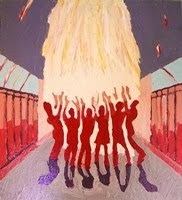 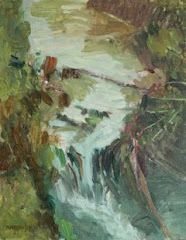 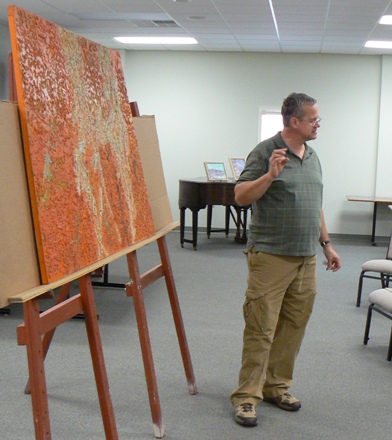 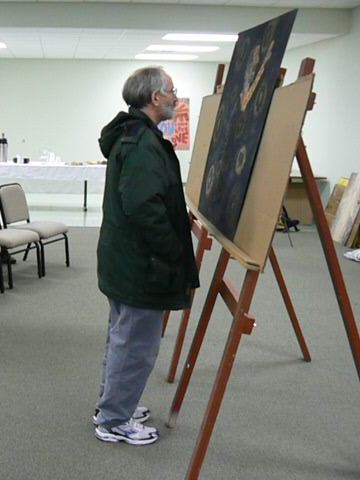